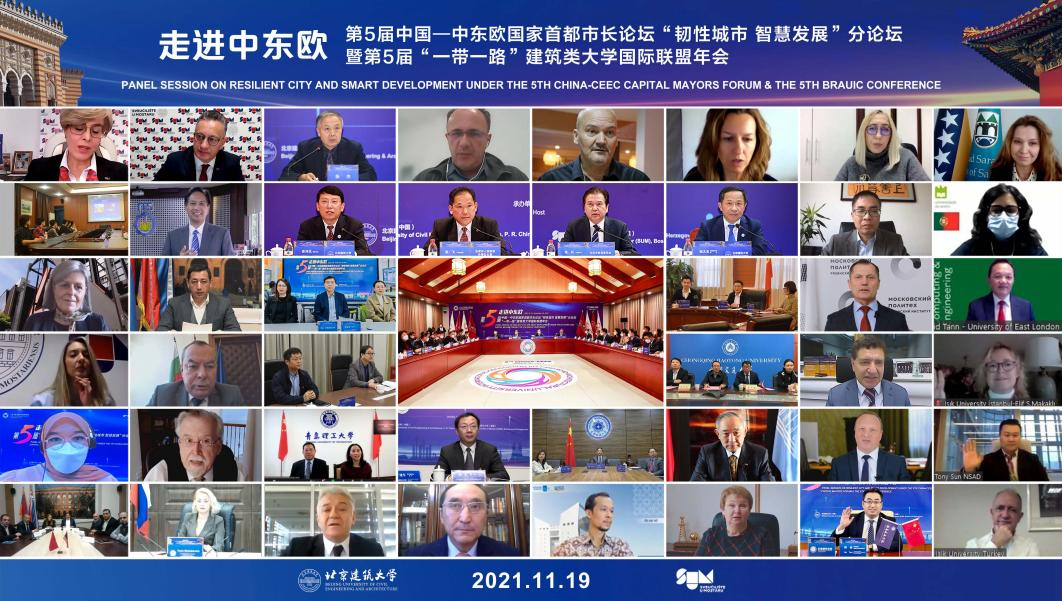 On November 19, 2021, the Panel Session on Resilient City and Smart Development Under the 5th China-CEEC Capital Mayors Forum & the 5th BRAUIC Conference, organized by the People’s Government of Beijing Municipality, P.R. China and City of Sarajevo, Bosnia and Herzegovina, and jointly hosted by Beijing University of Civil Engineering and Architecture (BUCEA) and University of Mostar (SUM), Bosnia and Herzegovina, were held online. The conference attracted more than 200 representatives from 39 universities and institutions in 15 countries including China, the UK, Turkey, Kazakhstan, Italy, Serbia, Bosnia and Herzegovina, Armenia, Bulgaria, Montenegro, Portugal, Greece, Russia, Indonesia, and the United States. 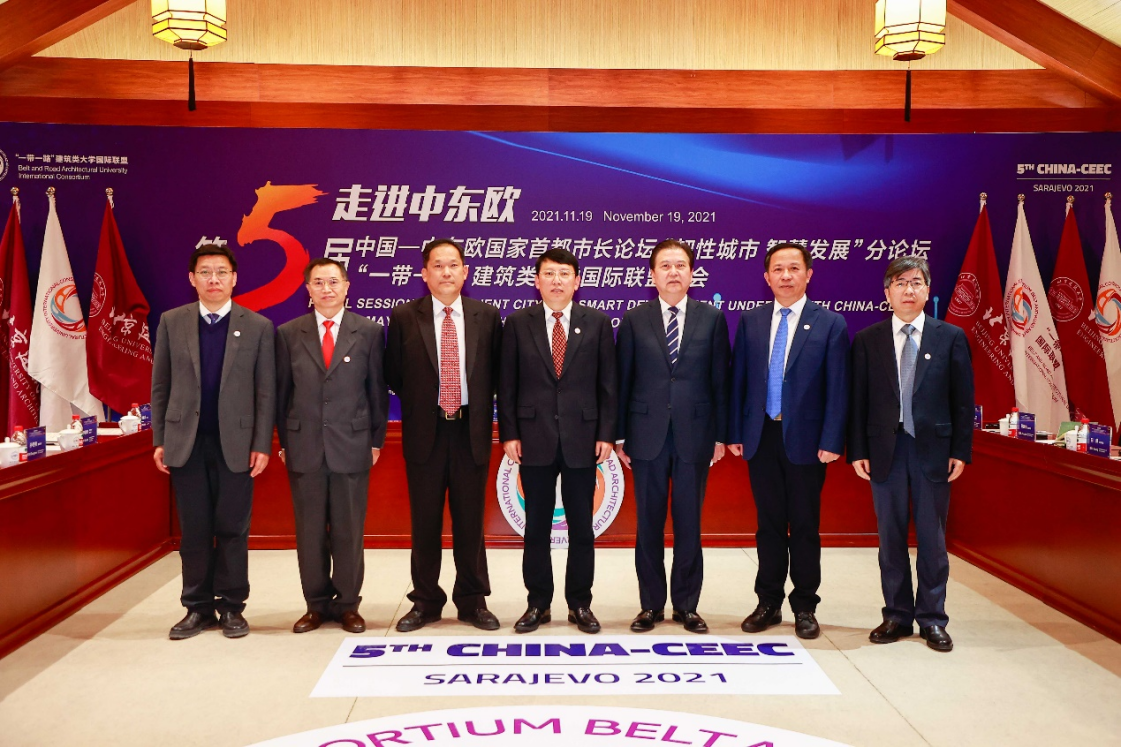 The participating leaders expressed their warm congratulations to the convening of the conference, and extended sincere gratitude to the guests from various countries, partner organizations, and representatives from all sectors of society who have worked hard for the conference. It was noted at the conference that the Panel Session, as an important parallel event under the framework of the China-CEEC Capital Mayors Forum, with the theme of “Resilient City and Smart Development”, provided a good exchange and discussion platform for universities from countries along the Belt and Road and Central and Eastern European Countries. Against the backdrop of the global fight against the COVID-19 pandemic, members of BRAUIC gathered online for the event, demonstrating their responsibility for the shared future and their sincere expectation for the information technology application, diversification, and globalization of higher education.

The conference stressed that in the future, BUCEA will closely focus on the high-quality development requirements of the capital, actively play its advantages and roles in the building of Beijing as an international exchange center, deeply integrate into the overall development strategy concerning foreign affairs of the capital, and pool international scientific research resources. BUCEA will take concrete measures in international innovative talent training, international industry-university-research project cooperation and industrial transformation, and international scientific, technological, and cultural exchanges and services. The conference called on all BRAUIC members to keep working together, continue to break new ground, and jointly promote the BRAUIC to achieve new goals. 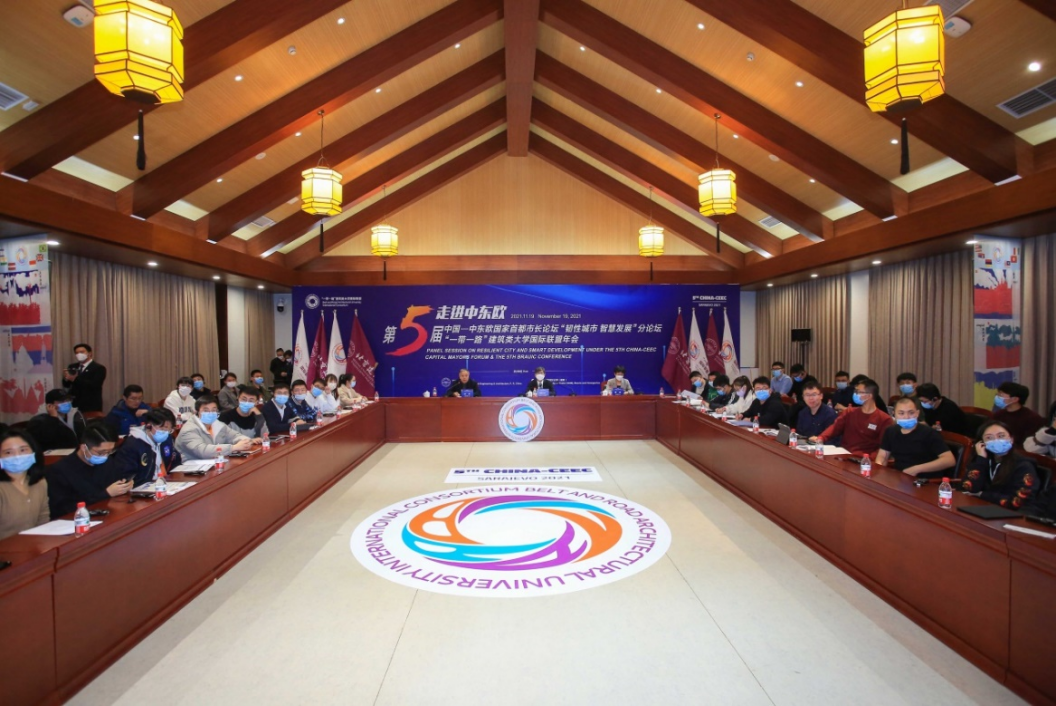 The Panel Session invited 5 experts from 4 countries to give keynote presentations on the common topic of managing “big city malaise”, sharing their wisdom and useful technologies to provide a reference for improving urban management and promoting green and resilient urban development.

In the session, ZHANG Jie, National Master of Engineering Survey and Design, and Dean of the School of Architecture and Urban Planning, BUCEA, Srdjan Krco, Co-founder of DunavNET and Visiting Scholar of the University of Donja Gorica, Montenegro, Prof. Ivo Čolak, Vice Rector of the University of Mostar, Bosnia and Herzegovina, Vesna Stojaković, Founder and Head of Digital Design Center, University of Novi Sad, Serbia, and Nasiha Pozder, Member of the Parliament of Federation of Bosnia and Herzegovina and Senior Advisor on urban planning and designing topics for Prime Minister of Sarajevo Canton, respectively presented their reports:  The  Historic and Cultural Cities of China and HUL Approach to Sustainable Management ,  From Smart Cities to Sustainable Cities: The Value of Data ,  The Old Bridge in Mostar — Phases of Reconstruction ,  Digital Design Futures in Architecture and Urbanism , and  Sarajevo Smart-up .

At the conference, the  Declaration on Development of the Belt and Road Architectural University International Consortium  and the  Five-Year Action Plan of the Belt and Road Architectural University International Consortium (2021-2025)  were officially released. All members promise to uphold extensive consultation, joint contribution, and shared benefits, optimize the operating mechanism of the BRAUIC, promote the formation of a multi-level and multi-mode network for international cooperation; uphold the concept of openness and inclusiveness, reinforce international collaboration and innovation on scientific research, build high-end international platforms for innovation and cooperation; uphold the people-centered principle, pursue high standards, benefits to faculty and students, and sustainability, and promote mutual recognition of academic credits and qualifications and joint degree-awarding within the BRAUIC in stages. According to the  Action Plan , by 2025, BRAUIC will gather a large number of stakeholders in the architectural field, establish effective and unimpeded channels for internal and external communication and cooperation, engage in multilateral collaboration to jointly build platforms for exchanges and cooperation, and jointly probe into innovative development mechanisms for architectural disciplines and universities.

According to the  Action Plan , the BRAUIC will expand international cooperation network, improve and perfect the operating mechanism, further advance international liaison, and enlarge the global influence of the BRAUIC. It will also set up international innovation platforms and constantly push forward in-depth cooperation on scientific research among members, explore the feasibility of building an international internship and practice base for architectural education based on industry-university-research integration, adopt workable measures for construction of the Belt and Road Architectural and Cultural Heritage List and Database, and step up cooperation and training on cultural heritage protection. More efforts will be made to promote the cultivation of international talents, and innovate sharing of superior educational resources among members, engage in cooperative school-running by multiple means, exchange faculty members to give lectures, and jointly cultivate postgraduate students; promote mutual recognition of academic credits and qualifications and joint degree-awarding among members of the BRAUIC, jointly open course series in the fields of urban design, green building, sponge city, smart city, resilient city, etc.; prepare the establishment of joint laboratories and research centers, and provide engineering and technical vocational training in all forms for technical staff and government officials from the Belt and Road countries, as well as multinational staff based in Beijing, to contribute to the infrastructure construction of the Belt and Road countries. Its efforts will also be made to constantly create brands of the BRAUIC, including competitions, exchange programs, summer schools and young scholars forums.

In 2021, the University of Novi Sad in Serbia is recommended to be the Chairman’s Unit of Central and Eastern European Region, where Professor Dejan Madić, Rector of this university shall serve as the CEEC Chairman. The chairman is responsible for fostering members’ development in the region, organizing various activities, and bringing all members in the region together. Rector Dejan Madić said, “We are honored to be a member institution of the Belt and Road Architectural University International Consortium and act as its Chairman Unit of the Central and Eastern Europe Region. It provides us with a unique opportunity to form new partnerships, both regionally and globally, and share our knowledge, experiences and expertise, but also to participate in the ongoing global discussion on the future of our cities and contribute to the joint mission of promoting resilient urban development. By using the BRAUIC platform, we are planning to organize more in-depth cooperation and exchanges among universities from China and Central and Eastern European Countries.”

The Proposal of Global Campus: Exchange Program for Summer Schools  was also announced. It calls for promoting the summer school exchanges and accelerating mutual recognition of credits, and providing preferential policies and incentives, such as tuition reduction/exemption and other shared courses. During this summer, the BUCEA joined hands with a number of universities at home and abroad to organize and offer 15 summer school projects, through which 114 students have received tuition-free places.

Despite the impact of the COVID-19 pandemic, the competition has attracted over 500 teachers and students from 34 universities in 13 countries, along with significantly more entries than previous years, which fully demonstrated the increasing influence of BRAUIC to bring people together and promoted scientific innovation and educational exchanges among Belt and Road architectural universities. The organizing committee invited CUI Kai, Member of the Chinese Academy of Engineering and National Master of Engineering Survey and Design, Giuliano Panza, Member of the European Academy of Sciences, and Sisi Zlatanova, Chairman of the Fourth Technical Committee of the International Society for Photogrammetry and Remote Sensing, as honorary members to guide the events. A total of 24 experts from 10 countries formed the evaluation team in three categories and selected award-winning works. The work,  Boat Moves Thousands of Miles , guided by JIAO Chiyu, a teacher from BUCEA, won the first prize. The works,  Connection , guided by CHEN Wei,  Three Piers   i  n A Village , guided by REN Zhongqi,  Moon Bridge , guided by JIAO Chiyu,  One Belt One Road: Dreaming of Nanyang Ancient Town , co-guided by LIAO Weizhang and LIU Yang,  The Shadow of the Pagoda Is Far Away from the Blue Water , and the  Sound of the Buddhist Is Far Away from the Township of Guangling , co-guided by HUANG He and FENG Yonglong, won the third prizes. During the awarding session, Professor Sisi Zlatanova was specially invited to give comments on the award-winning works. The competition has effectively promoted the international influence of BUCEA and the level of openness, and enhanced the academic and cultural exchanges between teachers and students from all over the world. It has thus become a brand activity of BRAUIC.