The launching ceremony of 2021 National Sci-Tech Week and Beijing Sci-Tech Week kicked off on May 22 at the Exhibition Center of Zhongguancun National Independent Innovation Demonstration Zone. On May 24th, JIANG Zeting, secretary of CPC Committee, BUCEA, and CHEN Gang, deputy secretary of CPC Committee, BUCEA, visited the exhibition of BUCEA at the venue of Sci-Tech Week, and then visited other exhibition areas for further learning the results of others. The delegation include staff from Party and Administration Affairs Office, Science and Technology Development Research Institute, School of Civil and Transportation Engineering and other departments. 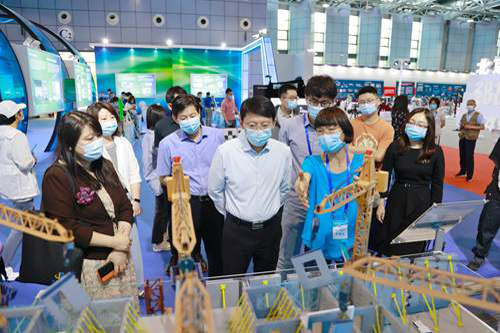 Based on the theme of “Looking Back in a Hundred Years: The Communist Party of China Leads the Development of Science and Technology”, this Sci-Tech Week highlights the significant advances and outstanding achievements of scientific and technological innovation led by the Party since the 18th National Congress, and is committed to carrying forward the spirit of scientists. Focusing on the construction of the international center for sci-tech innovation, the main exhibition, featuring both online and offline activities, emphasizes the achievements of sci-tech innovation, fight against COVID-19 with science and technology, Beijing Winter Olympics, poverty alleviation, and how science popularization delivers benefits to the people, etc. Besides, the event demonstrates the achievements of Beijing’s scientific and technological innovation and science popularization undertakings in supporting innovation and development, and also offers the public a glimpse into the newly sci-tech development, who can get a first-hand experience in learning about remarkable achievements in the sci-tech innovation. “Achievements in R&D and Application of New Transportation Materials from the Perspective of Carbon Neutrality” and “Achievements of Assembled Monolithic Shear Wall Building Structure with Mortise-Tenon Joints” of the School of Civil and Transportation Engineering of the University are unveiled in this Sci-Tech Week. 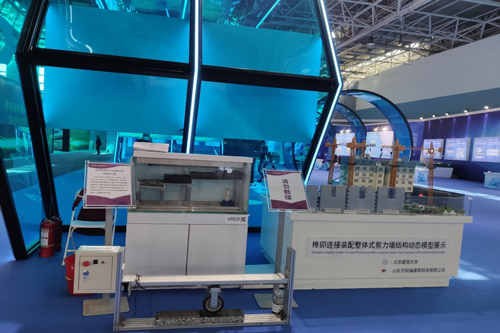 Achievements in R&D and Application of New Transportation Materials from the Perspective of Carbon Neutrality:

Taking the scientific research level of urban transportation infrastructure of BUCEA into consideration, we aim to develop new materials which are green, durable and low-carbon for the transportation industry, including programs like developing polyether polyurethane cement based on polymer controllable polymerization and topological synthesis technology, and inventing a series of new technologies for cold paving asphalt pavement such as waterborne polymer modified epoxy emulsified asphalt; Coal-based waste is recycled for inventing high-speed ultrafine dispersion and micro-crosslinking toughening technology, and a series of thermoplastic elastomer-based and polyolefin-based composite anti-rut agents have been synthesized. The invented materials and technologies can be employed under normal temperature, and have been applied in many domestic expressways and first-class highways, with almost zero carbon dioxide emission, which is an upgrade of traditional hot-mix asphalt pavement technology and promotes the realization of the goal of carbon neutrality.

This technology is about the invention of a fully precast and assembled integral structure without exposing steel bars, and has over 10 authorized invention patents in China and 2 invention patents abroad. It is renown as the most efficient and effective precast concrete shear wall technology up to date, and has been put into practice in engineering projects, totaling for nearly 1 million square meters. The BUCEA team has signed an agreement with Architectural Design and Research Institute of Tsinghua University to jointly build a technological system of precast shear wall structure suitable for Industry 4.0.

There are two types of precast wall slabs that make up the assembled monolithic shear wall building structure with mortise-tenon joints: mortise-tenon slab and blind hole slab, respectively. Transverse grooves are arranged at the side edges of the mortise-tenon slab and intersect with longitudinal holes near the side edges. The side edges of the blind hole slab are provided with non-penetrating transverse holes which intersect with the longitudinal holes near the side edges. Precast wall slabs has no exposing steel bars, and the whole structure is easy to be put into use for standardized design, industrial manufacturing and assembly construction. It is expected that the cost of assembled structure can basically level with that of cast-in-place concrete structure.