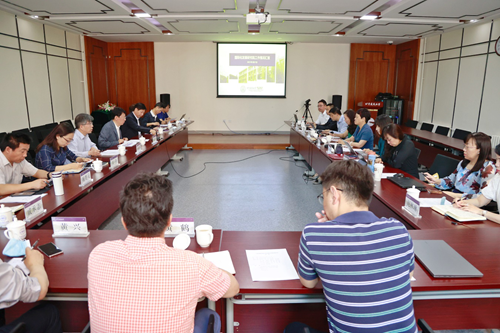 JIANG Zeting affirmed the efforts of IDRI for the past year since its founding. He stressed that international development plays an important part in building a high-level university, and is crucial for BUCEA to build top-notch faculty, establish first-class disciplines, cultivate outstanding students and make immense contributions to the society. He demanded IDRI to conform with the objectives of the 14th Five Year Plan and further clarify work priorities. First, with the support of the Belt and Road Architectural University International Consortium, IDRI should continue to enhance the “1+N” innovative platform and give impetus to the model of “One University for Multiple Sci-Tech Parks”. Second, IDRI should prompt the application for Sino-foreign Cooperatively-running Programs, improve policy framework and coordination among departments, and upgrade the quality of international education. Third, BUCEA should give free rein to IDRI’s role as a middle ground, which can provide a platform for the institutes and faculty’s development and serve for students’ cultivation, thus, culminating in a linkage mechanism that can widely mobilize the schools. Fourth, BUCEA should strengthen the Party building, incorporating the study of the CPC history and the special action regarding Three Styles of Work, and thus ensure the requirements of “upholding the leadership of the CPC in talents and international affairs” put into practice.