The opening ceremony of the third International Summer School of Beijing University of Civil Engineering and Architecture was held. 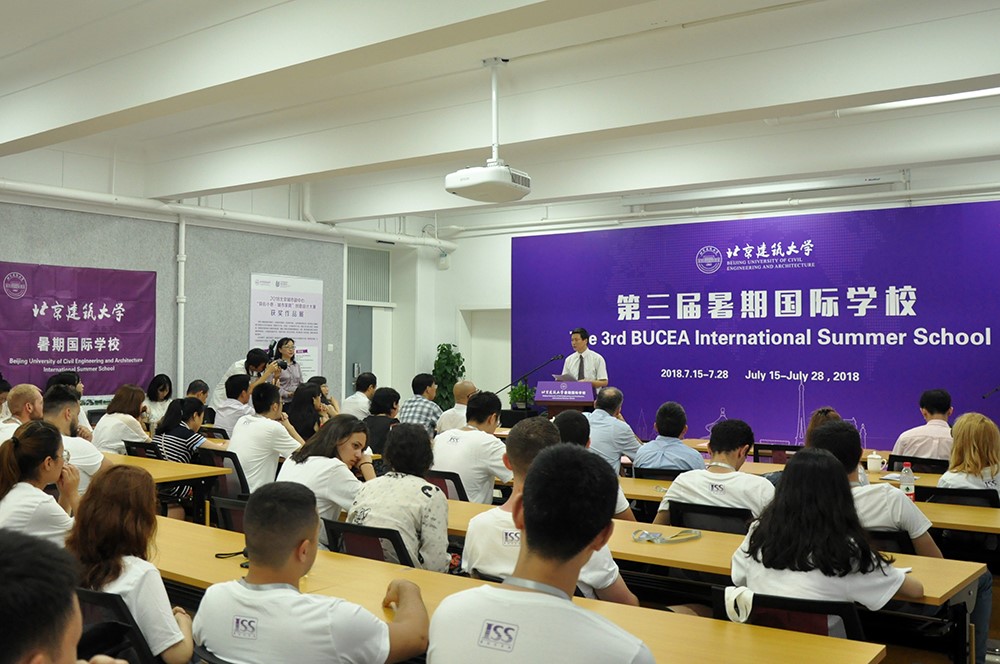 In his speech, President Zhang Ailin congratulated the school on its vigorous development and welcomed students and teachers from different countries and regions. He said that the annual International Summer School is an important platform for our school to give full play to its disciplinary characteristics and advantages, implement the open education strategy, and extensively carry out international educational exchanges and cooperation. International Summer School provides a platform for teachers and students from different countries and cultural backgrounds to spread excellent culture, learn new knowledge, and exchange new ideas, promoting extensive exchanges among students from different countries. Zhang Ailin said that the current era is an era of openness, an era of “Internet Plus”, and also an era of economic globalization and internationalization of education and technology. In the new era, students should "read thousands of books and travel thousands of miles". They should not only study theory, but also strengthen practice. They should worship teachers in a broad sense and go to universities in a broad sense. Finally, Zhang Ailin expressed his best wishes to the students attending the International Summer School. He said that the process of studying and exploring scientific truths will be permanent, and the deep friendship formed through mutual learning will also be permanent and unforgettable. This event will become a valuable life experience and wealth for them.

At the opening ceremony, the teachers and students watched the English promotional video of Beijing University of Civil Engineering and Architecture to learn about its development situation, discipline construction, talent training achievements and development characteristics.

Kirk Richards, a student from the University of South Wales, delivered a speech as a representative of the International Summer School. He gave a brief introduction on what he saw and heard in the two days after coming to Beijing, expressed his love for Beijing, and looked forward to communicate with students from various countries on study and life in the next two weeks.

After watching the English promotional video, Zhao Hu, a student from Class Water173 of the “2+2” project of our school’s Sino-US cooperative education, gave a speech on behalf of the students of the International Summer School. He offered advice to the students in a humorous manner, and also welcomed the teachers and students attending the International Summer School of this summer.

At the end of the opening ceremony, Zhao Xiaohong summed up attention points of international school and announced the official opening of the third International Summer School.

During this summer vacation, the International Summer School has invited teachers from the University of South Wales, the University of Architecture, Civil Engineering and Geodesy in Bulgaria, Armenian National University of Architecture and other overseas first-class universities, as well as internationally famous architects and professors to give lessons. In terms of curriculum setting, we highlight the professional characteristics of Architectural Colleges and universities, covering architecture, civil engineering，Chinese culture, language exchange and other fields. In addition to the regular courses, a variety of cultural practice activities are also arranged, providing students with an opportunity to understand and experience Chinese traditional and modern architecture.